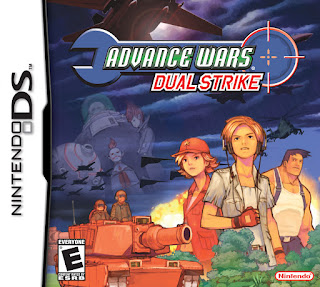 Advance Wars Dual Strike NDS apk android for DraStic free download working on mobile and pc,Nintendo DS EmulatorThe popular Advance Wars series is coming to the Nintendo DS. The latest game in the vaunted military tactics series features a new battle system that takes full advantage of the system’s two screens. Use the top screen for quick-reference battle intel, or take control in battles that rage across both screens. Command a fleet of fighters high in the skies while troops clash with the enemy on the ground far below. Choose from new Commanding Officers, and combine their powers for incredible attacks that can turn the tide of battles. For a battle with a twist, players lead soldiers into a fast-paced, action-oriented battle against a storm of enemies. The game’s acclaimed map editor also returns. Just grab a stylus and draw maps right on the touch screen, then send the maps to friends wirelessly.Game Storyline: On the heels of its last defeat, the nefarious Black Hole Army has fallen under the control of a deadly new commanding officer. He has sent its new COs to attack the nations of Wars World once again, and it’s up to the allied armies of Orange Star, Blue Moon, Yellow Comet and Green Earth to put an end to Black Hole once and for all.
Characters: All of the COs from the first two Advance Wars games are here, as well as nine new characters. These include Orange Star’s Rachel and Jake, Blue Moon’s Sasha, Yellow Comet’s Javier, Green Earth’s Grimm and the Black Hole Army’s Koal, Jugger, Kindle and Von Bolt. Each army receives new COs, each with unique CO powers.
How to progress through the game: Advance Wars: Dual Strike contains several game modes:
In Campaign mode, players fight back against the Black Hole Army’s invasion.
Vs. Mode offers dozens of new battle maps, as well as tons of favorite maps from the previous two Advance Wars games. Players can play both normal and DS battles, both single and multiplayer, providing endless replay potential.
Combat mode gives players fast-paced action: Instead of turn-based battles with large armies, players fight in real time while controlling a single unit.
Both Combat and Free Battle are available for multiplayer matches. Using DS Download Play, combat can be played wirelessly by up to eight people using a single game card.
There are two kinds of battles: Normal and DS Battle. In normal battles, the battle map appears on the touch screen, and the top screen displays information about players’ units and enemies. Players can check their units’ strengths, watch a missile’s trajectory or check the clock in timed matches. In new DS Battles, players fight on both the top screen and the touch screen. Fight one battle on the ground and another battle in the sky, or direct two separate battles, providing support by sending units from one battle to the other. If the top-screen battle needs a boost, send a few tanks up to lend a hand.
Special powers/weapons/moves/features: Advance Wars: Dual Strike uses both screens: the touch screen for battles and the top screen for special information, from unit and terrain details to special conditions in each battle. In special DS Battles, players fight on the top screen as well, commanding both battles and redeploying units from one screen to the other. The Map Editor now uses the stylus, so that players can draw their maps right on the touch screen. Players now can trade their maps wirelessly too. Players also can use the stylus to give orders to their units; from moving to attacking, they control everything from the touch screen. Each time Commanding Officers win a battle, they gain experience – over time, they can learn new battle skills that increase their strengths or boost a unit’s abilities. There are more than 40 battle skills. Each of the COs has two separate special powers: a CO Power and a Super CO Power. These powers can freeze the battlefield, boost the attack range, rain bombs on enemies and much more. Now COs can team up for Dual Strike attacks with even more impressive results. New playable units include hulking aircraft carriers, invisible stealth fighters, devastating omni-missiles and insanely powerful megatanks. 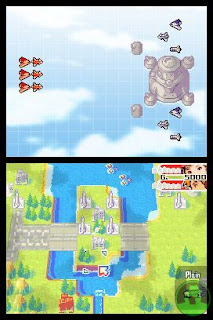 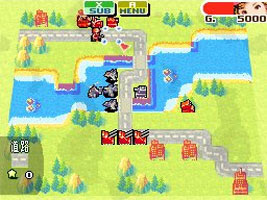