Conker’s Bad Fur Day is a platformer game for the Nintendo 64 released in 2001. The game follows the story of Conker, a red squirrel who is trying to find his way home after a night of heavy drinking. Along the way, he must navigate through various levels and defeat enemies using a variety of weapons and tools. The game is known for its humorous and mature themes, as well as its use of various pop culture references. It received generally positive reviews upon release and has since developed a cult following. 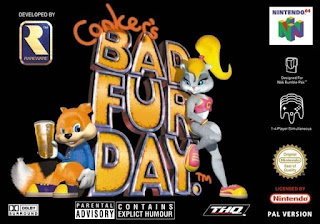