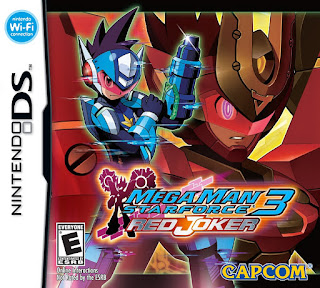 Megaman Star Force 3 Red Joker NDS apk android for DraStic free download working on mobile and pc,Nintendo DS EmulatorIn Mega Man Star Force: Red Joker, players travel between the physical world and the digital world via electromagnetic waves that form wave roads. Geo Stelar, the protagonist of the game, can see these wave roads through usage of his unique visualiser tool. Once in the digital world, Geo can merge with the electronic life-form known as Omega-Xis to become Mega Man. The wave roads are being overrun by mysterious noise, generated by an approaching gigantic meteor that threatens both the physical and digital worlds of MMSF3. Fortunately, Mega Man discovers that he can control the Noise, using the new Noise Change system to transform into Red Joker form…

Players with friends who own Mega Man Star Force: Black Ace can share unique items and powers utilizing the Nintendo Wi-Fi connection, enhancing their individual characters.Two co-existing worlds — explore the real world in human form and transform into Mega Man to maneuver through the virtual “Wave World”
The main theme is ‘Noise’ and during battle the Noise Ratio is indicated on the screen. The Noise Ratio increases in different situations. As the Noise Ratio increases there are different effects.
Cyber battles feature an immersive third person view as players engage enemies in a 3×5 battle grid.
Cards now stack and are scattered randomly. Only the top card can be used when stacked. Mega-class and Giga-class cards have greater surface areas and are more likely to stack.
Each version will have different “Noise Change” probabilities and final transformations unique to each version.
There are more than 100 Mega Man forms (transformations) possible by utilizing “Noise Change”.
Each character has their own customizable Personal Page in the game where Battle Cards and information can be viewed and traded with friends to compare progress 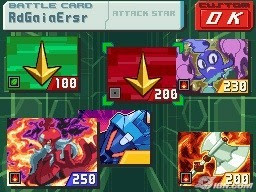 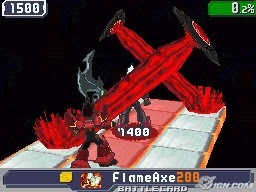 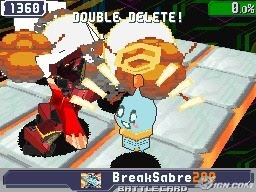