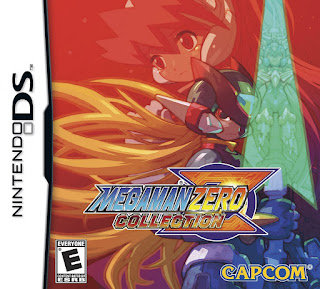 MegaMan Zero Collection NDS apk android for DraStic free download working on mobile and pc,Nintendo DS EmulatorThe Mega Man Zero Collection is comprised of all four Mega Man Zero titles bundled together. The Mega Man Zero series follows Zero through a dark and thrilling 2D action-adventure with high-quality visuals and action. Users can expect to make use of Zero’s trademarks weapons like the Z-sabor and Buster Shot. There will also be interesting devices like the Chain Rod and Zero Knuckle. For the first time, the Mega Man Zero series will be available for Nintendo DS, complete with all-new modes.
In Mega Man Zero our hero awakens after 100 years of sleep to a world where innocent reploids (robots) are unjustly attacked by an organization called “Neo Arcadia”. This new government has turned the world into a place where it is extremely hard for reploids to live and where they are under constant persecution. Reploids who have managed to escape from the punishment flee to an old city which now lies in ruin, but the evil Neo Arcadia is closing-in on their location. A genius scientist named Ciel, who lives with the innocent reploids in hopes of saving them, tries to revive the legendary reploid Mega Man Zero in order to save the cornered reploids. As Mega Man Zero, it is up to you to save the world.
In Mega Man Zero 2, it has been one year since Zero saved the reploids and defeated the evil advance of Copy X and Neo Arcadia. Nevertheless, Neo Arcadia still hunts him and sets a trap for our hero. His plan is to trick Zero and use him to wreak chaos between reploids and humans once again. But, can he succeed?
Mega Man Zero 3 is set in a world called “Neo Arcadia” that has been created as a utopia for humans and reploids. This new chapter continues the adventure of the series’ title hero, Zero, and his reploid allies in the Resistance group who are fighting for peace. In Mega Man Zero 3, Zero encounters a malevolent new reploid called Omega who has unleashed the evil power of the Dark Elf to brainwash the Resistance in order to take over Neo Arcadia. As the only one who has escaped the brainwashing attack, Zero must fight to save his allies and Neo Arcadia.
Mega Man Zero 4 picks up right after the events of Mega Man Zero 3. After falling under the evil rule of Dr. Weil, Neo Arcadia has collapsed into a state of chaos and confusion. Zero discovers this disastrous turn of events when he and his friends come to the rescue of a band of humans fleeing Neo Arcadia. Now it’s up to our hero Zero to resolve this terrible conflict between humans and reploids to restore peace and security to the land. Features new systems to seize enemy weapons and create strengthening chips, plus new Cyber elf programs to introduce new abilities. 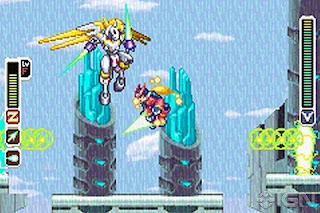 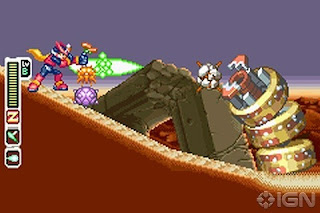 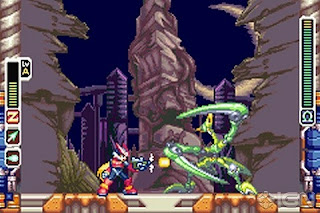